What is asynchronous Programming?

Start with the comparison (that assumes you know normal threaded execution).

The reason behind using asynchronous is it makes your code drastically more efficient for the large number of tasks that are less communicative with each other and have plenty number of I/O operations or any other operation force them to wait for a little. 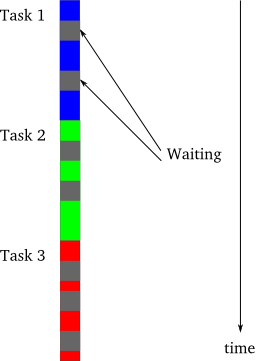 As you can see from the left figure , there are three tasks follow each other. The grey fields are symbolizing the some waiting fragment in time because of I/O operations (like downloading, printing, scanning). So as you it can be seen from the figure the waste of time is really large in that normal sequential execution.

Thus with asynchronous execution you might deal with these time wastes and instead of waiting some, you can go with the another process. However you may face with some new difficulties. For example there can be some data need to be interchanged between tasks. Now you need to also consider the sequence of executions. This is the one of the main concern of asynchronous execution.

At last, these are some underpinning conditions that makes asynchronous execution viable: